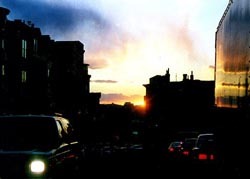 Got a scoop? Email news.

Local Films Update
The film "Six Ways to Sunday," produced by Boston company Scout Productions, will open in New York City and LA on March 5 and then around the country on March 12. The gripping, often creepy film portrays an 18-year-old (Norman Reedus) who lives with his overbearing, washed-up mother (Debbie Harry) and falls into a life of organized crime. The film is based on Charles Perry’s novel "Portrait of a Young Man Drowning."

The local film "Southie" has been picked up for distribution by Lion’s Gate. Although there is not a set date yet for the release, look for it in the theatres soon. The name of the company that will distribute Southie is Lion’s Gate. Look for the premiere to be in Boston. For more information and up-to-date information visit their site at http://www.southiefilm.com/southienews.html

The film "The Wedding Band," directed by Martin Guigui, was showcased as part of the Palm Springs International Film Festival in January. Filmed in May of 1997 on Lake Champlain in Vermont, "The Wedding Band" is about a Jewish/Catholic wedding. Jon Fishman is the band’s drummer, and performs (in a pink dress) with Hebber Stebber (played by Burlington musician Chad Hollister), Barry Goudreau (late Boston guitarist), Deborah (a.k.a. Debbie) Gibson, and Dom DeLuise.

Filming of Vermont film "The Boondock Saints" has been completed and is aiming for release in 1999. Troy Duffy directs this thriller about an FBI agent who must bring in a pair of Irish twin brothers (Stephen Dorff and Norman Reedus) on a vigilante mission to rid society of all evil. Along the way, he must defeat a mysterious assassin hired to stop them. Patrick Swayze and Billy Connolly also star.

The film "Lost and Found," filmed in Boston and Scituate, MA, is currently in post-production. This independent film was directed by Jeff Pollack and stars Michael Landes. No release date has been scheduled yet, but the film will be distributed by Warner Bros. The plot: A successful Bostonian goes off on occasional drinking binges which lead him into meeting a cute zoologist and her whiny roommate at a summer cottage.

"The Blue Shoe," produced by Peter Reynolds and FableVision, is starting a two-year theatrical run with Spike ‘n Mike’s Film Festival in March. Directed by Gary Goldberger, the animated love story "between a blue shoe and a green boot" was recently called "an eloquent combination of movement, stillness, and storytelling that allows us to put our heart into the soul of this little shoe" by Marcy Gardner of "Animation World Magazine." For more information, visit http://www.fablevision.com

Film Industry News
BFVF is proud to announce the recipients of the 1999 Massachusetts Media Fellowships, funded by the Massachusetts Cultural Council and the LEF Foundation and administered by BFVF. The Fellowships are an extraordinary resource in these days of extremely rare public funding for the arts, and the Massachusetts Cultural Council is to be commended for expanding this important program of unrestricted direct support to individual artists after the National Endowment for the Arts Regional Fellowship program ended in 1995. The $7,500 award winners include Walid Ra’ad of Northampton, MA; Robb Moss of Jamaica Plain, MA; Mary Kocol of Somerville, MA; Lauren Ivy Chiong of Cambridge, MA. Other winners include Michael Majoros, Paul Turano, Alexandra Anthony, Julie Akeret, Signe Taylor, Marlene Booth, Claire Andrade-Watkins, Irene Lusztig, Jocelyn Ajami, Gary Roma, and Courtney Bent.

The Academy of Motion Picture Arts and Sciences will cut the "Documentary Short Subject" Oscar as well as four other documentary awards next year. In a prepared statement, Academy President Robert Rehme offered this explanation: "The combined category will continue to give the really extraordinary short theatrical documentary a place to be recognized, but except for the Imax films, there really isn’t enough non-television work in the genre to justify a separate award these days." Of course, many hard-working documentary filmmakers expressed their disapproval of the decision.

Upcoming Screenings & Events
The Outwrite Film & Video Series will be held Saturday and Sunday, February 27 and 28, at Boston’s Park Plaza Hotel, as part of the 8th Annual National Lesbian, Gay, Bisexual, and Transgendered Writer’s Conference. The series features Pratibha Pramar’s latest film, "The Righteous Babes"; Jay Corcoran’s "Undetectable," a documentary following six HIV-positive people as they start new drug regimens; "Dakan" by Mohamed Camara, a coming-out story set in West Africa; "Treyf" by Alisa Lebow and Cynthia Madansky, a documentary by and about two Jewish lesbians; "On," a documentary about longtime lesbian activist Blue Lunden; and more. A weekend pass for the festival is $15. It runs Saturday, February 27, 9:00 a.m. to 6:30 p.m., and Sunday, February, 28, 9:00 a.m. to 1:15 p.m. For tickets and information, call Outwrite at 617-262-6969.

The 1999 Maine Jewish Film Festival is scheduled for March 4 through 10. Internationally acclaimed director Michael Verhoeven will introduce and answer questions about two of his award-winning films: "My Mother’s Courage," a complex, challenging, and true story of a woman deported from Budapest who demands to be released–and is released simply because the Nazi in charge has the power to do it; and "The Nasty Girl," the story of a German teenager who uncovers her town’s unsavory Holocaust history and the consequences she suffers. The festival will feature a full week of Jewish and Israeli films. The complete schedule will be available in February. To get on the Festival’s mailing list, send e-mail with your name and address to bethaam@ime.net or call 207-879-0028. Also, check their web site at http://www.uahcweb.org/me/bet-haam/mjff.html

Women in Film and Video New England invites both members and non-members to their event "New Approaches to Science Literacy for Children," to be held Monday, February 1, from 7:00 to 9:00 p.m. at WGBH-TV, 125 Western Avenue in Allston, in the Cahners Conference Room. A panel of innovators in the field–WGBH, Tom Snyder Productions, "Zoom," and Wonder Cabinet Interpretive Design–will discuss their approaches to teaching science literacy. This event will be free for members and $15 for non-members.

The Decordova Museum presents an exhibit, "Karl Sims: A Video Retrospective," now through May 31, which features the computer animations of 1998 MacArthur Fellowship Award recipient Karl Sims. Sims, a computer/video artist, first began creating animation in this evolutionary manner while an artist in residence at Thinking Machines in Cambridge. The exhibition, which was organized by Adjunct Curator for Media Arts George Fifield, anticipates the opening of the Boston Cyberarts Festival, which will take place throughout Boston from May 1 through 15. Sims’ most recent interactive installation, "Galapagos," will have its American premiere as part of the "Make Your Move: Interactive Computer Art" exhibition, DeCordova’s contribution to the Boston Cyberarts Festival. "Make Your Move" will be on display in the Media Space at DeCordova from March 27 through May 31.