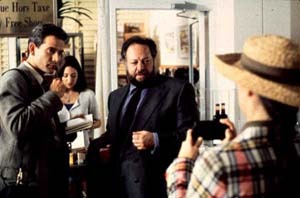 Share
After 20 years of acting, directing and casting, Kevin Fennessy has opened his own Casting Agency.

For 20 years, Kevin Fennessey has amassed knowledge of the craft through acting and directing. He studied at the Boston Conservatory of Music and at York University in Toronto, Canada. Later, he worked at Collinge/Pickman Casting, where projects included "Good Will Hunting" and "The Spanish Prisoner." This past year, Fennessey joined forces with Christy Scott’s Saint-Aire Productions to open Kevin Fennessey Casting. He worked as the local principal and extras casting director for the DreamWorks feature film "The Love Letter," filmed in Rockport, MA, and the independent film "The Autumn Heart," which is a 1999 Sundance Film Festival entry. Kevin Fennessey Casting provides a full range of casting services, including extra roles, day-players, and voice-overs for studio features, independent films, and national and regional commercials.

On a rainy day early in January, I met Kevin Fennessey at his newly refurbished office in Inman Square in Cambridge. The space is inviting and ideal for the filming, readings, and meetings that occur at a casting agency. We walked to a nearby restaurant to discuss the casting business, in particular the Boston scene and how local actors can be the next Matt Damon.

AS: How has the film industry in Boston changed in the last five years?

FENNESSEY: In 1994, I started in casting. I had been an actor and directed theater in New York and Cambridge. There is a momentum around high-profile films like "Good Will Hunting" and the experience of a smaller film like "Next Stop Wonderland." There is a possibility that Boston can become a center. There is talk of projects for next year.

AS: Why is there such appeal now?

FENNESSEY: In general, it is a less New York/L.A.-centered industry. There are emerging independent filmmakers nationwide. And there are increased production support services. Major films that come to town do so for a reason: location. "Love Letter" was filmed entirely on location. They scouted New England areas and did not want to reproduce a New England town. With "The Spanish Prisoner," David Mamet wanted it here.

AS: How can a local actor go national?

FENNESSEY: Big films are cast at A-level. For day-player roles, the producers may see Boston actors for it or not. It comes down to money. Actors in the area worth seeing for a role are less money to transport. For "A Civil Action," only extras casting was done locally. The directors were very hands-on. Even extras for specific scenes were hand-picked. Actors become known through showcases and local theater. Commercial and corporate video are where the Boston actor gets on-screen experience. The local theater scene also serves as a showcase. I see everything that I can. You never know in this business what will lead where. A casting director is only as good as their knowledge of the available talent pool. Boston actors don’t study and take classes the way New York actors do. I encourage actors to do whatever they can to be in a community with other actors—take classes and do theater. [Such outlets] in and of themselves are a good experience, and networking leads to more contacts.

AS: How do out-of-town production set up in the area?

FENNESSEY: "Love Letter" set up a production company and worked from here. A small indie will set up office with locally-based people. Most of the initial casting is done before the production comes to Boston.

AS: What made you start your own company?

FENNESSEY: I had strong support and good initial reaction to going solo. I decided to take all the stuff that was happening and focus it and decide where it would go. I have a good partner, too, Christy, who also has a production company.

AS: Is Boston going to continue to be popular?

FENNESSEY: I recently worked on "The Autumn Heart," which is a Boston-based indie film which [was] in competition at the Sundance Film Festival this year. This will bring additional attention to Boston as a film community. But we are still feeling the effects of "Good Will Hunting." There is a commitment to making Boston happen. Now we are feeling it in the film community more. There’s an excitement. David Kleiler of Local Sightings is running an Investment Symposium in Providence. This is to try to get the investment community to consider film as an investment option. We need support and backing of the local community.

AS: What are you looking for in actors?

FENNESSEY: Experience, talent, and training. If you know something about a project and can present yourself as appropriate as possible, you are a step ahead.

AS: What do you not see enough of that you wish you would see more of?

FENNESSEY: This is going to sound very cliche for Boston, but nontraditional types and multi-ethnic. There is a black talent pool that doesn’t get tapped.