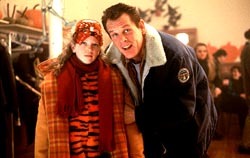 Share
A review of the local film.
In Paul Schrader’s "Affliction," Wade Whitehouse (as played by a brooding, hulking Nick Nolte) is doomed from the start. Born to an abusive, alcoholic father (James Coburn, doing his best with some unfortunately over-the-top lines) and a cowering mother, Wade is fated to live a crippled life. We join Wade in the final chapter of his life story–a story full of loss, disappointment, lack of respect–when his ghosts finally catch up to him. As with an out-of-control locomotive barreling down the tracks, we know the final destination, so whether or not you want to SEE the wreck, and its causes–both of which are done nicely, but not so subtly, here–will determine how much you enjoy this film.

Wade is the sole police officer in a small New Hampshire town, and a certified screw-up. His daughter, who now lives a few towns away with his ex-wife (one of two), wants nothing to do with him. His policing (what there is of it, since his boss has him plowing roads most of the time) is based purely on personal vendettas. His only two connections to a better way of life are his brother Rolfe (played uneventfully by Willem Dafoe, primarily as voice-over narrator), who has become a professor at Boston University, and whom Wade phones frequently for late-night therapy-like conversations; and Margie (Sissy Spacek), a local waitress and love interest.

The shooting death of a Massachusetts bigwig while on a local deer hunt pushes Wade closer to the edge. Was it an accident, as Wade’s friend Jack (Jim True) says, or murder most foul? And if it was murder, was Jack acting on his own, or was there a conspiracy–perhaps local developers, or even the mob? Wade, a small-town boy at heart, hates what he sees as the encroachment of the outside world, and begins a one-man crusade, not to get to the truth, but to do "what’s right."

And this is the beginning of the end for Wade. His violent defense of his hometown, of his way of life, is rooted deep in his upbringing. As Rolfe says, "Wade’s capacity for love was crippled at birth." In fact, Wade has never grown up; he has no self-awareness; he has never stopped being his father’s abused little boy. This is most obvious in Wade’s dealings with his pre-teen daughter; he acts more like her younger brother than her father, so irresponsible and prone to sulking and brawling is he. For Wade, everything is all rolled into one: his sense of self-worth, his hometown, his relationship with his father. When he finally lashes out, he attacks everyone close to him–his daughter, his girlfriend, his best friend, his boss–but they are merely caught in the blast; his father is ground zero. Beaten down by a world he was never prepared for, Wade narrows his life down to the one thing he knows will save him: the respect of his father.

Rolfe tells us that "facts do not make history." Presumably, the stories BEHIND the basic facts are what really matter. And at the heart of "Affliction" are stories: stories of Wade and Rolfe’s upbringing; stories of how a man was killed while hunting; and ultimately, the sad story of a man who hated himself so much that he finally destroyed everything he cared about, without ever really knowing why.