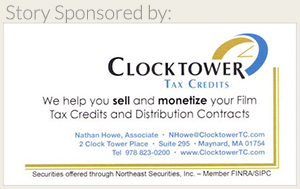 In Massachusetts tax law, a film is a product because it is a tangible object (for example, a videotape). However, filmmakers are not considered manufacturers (because they didn’t build the videotape themselves). This paradox forces filmmakers to suffer the drawbacks of making a product (charging sales tax to customers) without reaping any of the benefits usually associated with making a product (manufacturers do not pay a yearly tax on their materials).

Meanwhile, you can copyright films, even though copyrights don’t apply to products. You can’t patent your film, even though that’s what you’re supposed to do with a product. Is film a product or not?

To add another wrinkle to this confusing tax situation, writing is a part of filmmaking. Writing, however, is a service; professional writers do not charge sales tax or pay yearly taxes on their equipment. Yet writing for a film is included in the total cost of making that film, and is therefore taxable. You can attempt to exempt your writing costs from the tax, but that involves fighting the tax law on a case-by-case basis, which is almost always more expensive than simply paying the tax.

One more complication: ad agencies and broadcasters are considered service providers, so their filmmaking is not taxed.

Confused? You’re not alone. You’d be hard-pressed to find a local filmmaker who doesn’t find the situation confusing-and outrageous.

Massachusetts filmmaker Scott Anderson calls the dual taxation system "unheard of and unthinkable." Paying taxes on film stock and expensive cameras–like a yearly five percent tax on a $90,000 camera–is a great strain on already struggling filmmakers, and the film industry doesn’t have the clout to fight it, he says.

The Massachusetts Film Office does offer non-tax incentives for filmmakers, like fee-free locations and a free state production guide. But with states like Rhode Island offering equally tempting incentives plus lower taxes, Massachusetts is losing out.

Recently, moviegoers saw Rhode Island on the big screen in "Amistad," "Meet Joe Black," and "There’s Something About Mary." Starting January 8, the capital of Rhode Island is going to get plenty of national visibility from the NBC series "Providence." The Cumberland-born Farrelly brothers ("There’s Something About Mary") will film their next movie in Rhode Island this spring. Pawtucket native Michael Corrente ("American Buffalo," "Federal Hill") made his latest film, "Outside Providence," in Rhode Island this past September, and it will be released this March.

Why Rhode Island? Its small geographical size makes for easy-to-find shooting locations near each other; it has a reputation as a film-friendly community; and the Providence Film Commission markets the area aggressively. Best of all, however, might be the tax incentives.

Paul Campbell of the Providence Film Commission can easily rattle off these incentives; for instance, a 15-block-or-so area in downtown Providence has been declared the city’s arts and entertainment district. This district is intended to provide homes and workspace to all kinds of artists–graphic artists, screenwriters, and actors, to name a few. Plus, if a screenwriter who lives or works in the Providence arts and entertainment district sells a screenplay, it’s not subject to income tax or sales tax.

The arts and entertainment district helps the little guy, but Providence also has incentives to lure larger companies to the area. Under the "tax stabilization plan," businesses like TV production companies get real estate tax breaks: a 90% reduction the first year, an 80% reduction the second year, and so on. So a new production company getting hit with $10,000 in real estate taxes is only liable for $1,000 their first year. Tax stabilization applies to ownership and leasing.

Finally, the Providence Film Commission backs a bill being reintroduced into the state legislature this month which would offer a 25 percent tax credit to any resident who invests in an independent Rhode Island-produced film. This bill specifically targets indie films with budgets of $5 million or less. Paul Campbell suspects that young filmmakers will develop a loyalty to the area and return to make big-budget movies later, like Michael Corrente did.

Massachusetts vs. Rhode Island, or New England vs. the World? David Kleiler of the Mass Media Alliance wants to see Massachusetts tax law get more filmmaker-friendly. He also notes how many films are getting made in Canada these days. Paul Campbell of the Providence Film Commission has noticed the same phenomenon. State tax laws may vary, but we all use the same dollar–and often we simply can’t compete with the value of shooting abroad.

When a group of New England film commissioners met this June to discuss competition issues, they agreed that it was a good idea to market New England as a whole, not individual states and cities. Obviously, better Massachusetts tax incentives would boost New England’s desirability, but maybe, in the grand scheme of things, Providence’s gain isn’t necessarily Boston’s loss.