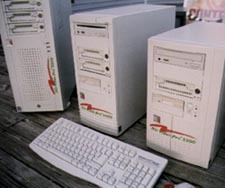 Share
A new nonlinear editing system enters the marketplace and sets a new standard for this former Avid user.
It is late October 1998, and I have decided to acquire a nonlinear video editing system (NLE). I have spent the last six months surfing the web, reading everything I can on the matter. There’s a feeling of anonymity to the whole procedure. I can’t get a handle on what these systems do, who really makes them, where the technology is headed, and why I should buy now.

My decision to look into editing systems emerges from the annoyance I feel at having to rent all the time. Just when I finish a job, it’s time to return the system. There’s not a moment to waste, no time to exercise some creativity or start some personal projects I’ve always wanted to do. Were I to own a NLE, I could be more flexible with my schedule, deliver faster, and my company’s workload might increase.

One Saturday, with a morning to kill, I wander into Newtonville Camera and approach the video counter, where Bob Mosian greets me. I ask him if he has any NLE’s for sale. "Funny you should ask," he answers. "Here comes Terry." Moments later, I am face-to-face with a gentleman in his late 40s, perhaps early 50s, with an impeccably groomed white goatee and a glint in his eye. This is Terry Cullen, founder and president of 1Beyond.

We talk. I explain my needs. He explains his system. All the while phone calls come in on his cellular phone–potential customers, satisfied clients, technical questions from his manufacturing people. We spend two hours talking, exchanging views. Our parting shot is that I will stop by his office tomorrow to see the editing system he is building for a client.

We meet at 2:00 p.m. at his place on the Charlestown waterfront. After some searching, I reach his door and ring the bell. He greets me with remote phone in hand. He has just made another sale. We go into the workspace, a room with a fireplace and a view of the Boston skyline and harbor. Here and there, computers sit quietly humming away. An LCD video projector sits on one wall, pointed towards an oversized electric screen. On the floor are stacks of CDs, CD-ROMs, videotapes (analog and digital), and industry publications.

On a table facing the water is the beast: a 21" monitor, two NTSC 14" Sony monitors, a keyboard, sound mixer, power panel, a mouse, a Sony DV-900 deck, assorted cables, and one or two mini DV tapes. Underneath the table is a tower with interchangeable hard disk cassettes (Terry: "They just started making these, and I thought they were great, so I just had to buy them").

Over the next two hours, Terry walks me through the 1Beyond NLE ND Video Pro 3300 and the 6600 (recently upgraded to the 7700). We are working with Fire Wire and Adobe Premiere 5.1. He explains many things that have heretofore been indecipherable to me. We talk speed, performance, manageability. The 1Beyond system is rapidly proving itself to be an extremely powerful system for a fraction of the typical cost.

Terry, I learn, is on the cutting edge of systems development for the NLE (nonlinear editing) market. He has not only decided to build an open (as opposed to proprietary) system, but understands that capturing DV without conversion or recompression of any kind (highest possible quality, no loss editing) is where is where the industry is headed. Virtually all high-end companies are wed to MJpeg, with millions invested in this 15-year-old technology. Even at its best, MJpeg is characterized as "lossy." Every time you compress, you lose more quality. Hence the term ‘native’ digital video. Simply put, the digital pattern stored in, say, a Sony VX-1000 camera is the exact pattern that is stored on those hard disk cassettes in his tower. You work with the original video in its highest possible quality. This means that I am looking at one of the first on-line suites that fits inside the trunk of an automobile.

At first I am a little queasy. Is this possible? I decide it is. I decide that Terry is not like most of us in the film and video business. We are storytellers; we don’t understand. Terry comes to this business with a background of EE/computer science/Harvard Business School after a career in high tech, running and starting several businesses. He is a computer sage disguised as a film/video guy. That afternoon, I place my order for a 1Beyond 7700 NLE.

As the days pass, I bug Terry, calling him, asking for a progress report on the system. He tells me his construction people in Marlboro are at work putting it together. He adds that the PC system I will be acquiring will be one of the fastest possible. I believe him. After all, how many NLEs work on dual 450 megahertz Pentium processors, half a gig of memory, and 130 gigs of disk? That’s almost ten hours of DV at its highest quality! With each passing day, completion of the system becomes more and more of a reality, until one day, it is ready for delivery.

In order to flesh out the content for this article, I call Terry and ask him to outline his production and business approach. He tells me one of his heroes is Henry Ford–which explains why Terry is such a nut about cars and why he collects them. Motorcycles, too. "Ford went against all marketing direction at the time he started his company. There were already 200 auto makers at the time he started. Everyone was making high end. He said, ‘I want to make a car everyone can afford.’ Everyone said he would fail because there was a small market, no room and no profit in the low end. He said, ‘I will create a market that doesn’t exist,’ and he made it happen. This is what is happening here. "I am keeping the overhead very low on the systems, even though it’s high quality. I believe it will open up the market to many people who couldn’t dream of having this kind of system before," he says.

A democratization of technology? I wonder. I ask him to continue.

"A number of things have come together at the same time: the new DV format; powerful PCs at reasonable prices; low-cost, high-speed, and high-volume disks; software that’s broadcast-quality, powerful, and easy to use; and operating systems that can handle the data rates and processing necessary for video editing-even dual processor architecture like Windows NT. Now you can have powerful editing tools on a standard, open PC to take advantage of all technology as it becomes available. You’re no longer captive to one limited manufacturer."

The great editing software debate "Why are you choosing to install Premiere on your 1Beyond editing systems?" I inquire.

"Software is like religion. You learn one, and everything else seems a little bit strange. However, Premiere is perhaps the most popular ‘open system’ software, and the new version has the look, feel, and power of the high-end software while adding up-to-date features like three-point editing and 99 tracks. It was given the Best Editor Award at NAB this spring."

I tell Terry that I was trained up in Tewksbury, MA, by a certified Avid editor. I add that Avid is all I’ve ever known. We compare notes. Everything Avid does, Premiere seems to do as well. As for new software, like the EditDV, we agree it could be simpler to use than Premiere, but it doesn’t have the depth, which comes from having thousands of users. Terry will also install easier software if a client so chooses, and adds that one of the benefits of open systems is you can change in the future, or even have multiple editors if you choose. You’re never locked in to any hardware or software. If a client so chooses, his or her system will also take Media Studio Pro, RexEdit, and just about any other editing software on the market. Again, these are the benefits of an open, standard system, compatible with the 90+ percent of the market that beckons developers.

I ask him why Premiere suffers from such a poor past reputation. We conclude that when Premiere came out about five or six years ago, computers were simply too slow to be able to handle its enormous potential and system requirements. As a result, people were left with a bad taste in their mouths. Over time, hardware and Premiere grew to be more powerful, until today, when we finally have affordable equipment that can tame the most demanding of operations. Now PCs are so fast that software, in some cases, can actually outperform some hardware that used to be added to accelerate operations!

Essentially, the debate on what software to use becomes moot when the hardware reaches a level of performance that can handle it. And so, Premiere, having quietly spent the last five years perfecting itself, continues to act respectably in an increasingly competitive marketplace-to which one must add that it now contains many effects that other high-end proprietary editors need to switch to Adobe’s own After Effects to perform. As for the Premiere user, he/she is still able to work freely with objects from Photoshop, Illustrator, and Pagemaker (all Adobe products).

The story comes to an end. My system is delivered. I begin working. What began as a Saturday morning trip to Newtonville Camera ends with me sitting in front of a 1Beyond NLE custom made to my needs at a price I can afford by a company run not by answering machines but by a human being. I feel this is just the beginning. I am grateful for having had the courage to put my company on the cutting edge of technological innovation. I am doubly grateful for having bumped into Terry Cullen. I feel like keeping all of this knowledge and competitive edge to myself, but I know 1Beyond is growing regardless. I write this article and publish it to perhaps speed the process, knowing more readers would like to know about possible alternatives and decide to follow the same path. Who was it that said there is strength in numbers?