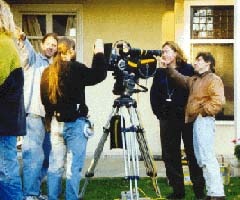 On the Set of ‘Eternal Embrace’

Share
'Eternal Embrace' might sound more like a romance novel than a one-hour TV pilot. Well, technically, it's both. Meet the team that made it happen...

"Eternal Embrace" might sound more like a romance novel than a one-hour TV pilot. Well, technically, it’s both. Shot in the Swampscott/Boston areas, the TV series chronicles the experiences of a Spirit taking on different forms to help the characters of the week’s show. The pilot episode centers on a dying woman who lives vicariously through romance novels. The Spirit comes to life as the "Rogue" – the main character of her latest novel.

LF: What drew you to "Eternal Embrace"?

HAMZEH: Its beauty. The relationship of the [dying woman and her sister], since I had grown up watching my own six sisters and learning their pains and joys and learning about their relationships – and I owe them a tremendous amount. So I was quite passionate when I read the story. I understood it so perfectly.

LF: How did you judge the shoot overall?

HAMZEH: I’m very pleased with the entire process, so I can’t say I want to do anything differently. The people that were around me did an excellent job. I was in the background just watching an incredible commitment and dedication that money can’t buy. Was I surprised? No, I wasn’t, because this is the way I like my set. I hand-select almost every single person who needs to be on the set, and they always complement each other, their personality or their ability to work so hard to make something happen.

LF: What films or directors move you?

HAMZEH: Many films move me, and many directors move me in a variety of ways, so it would be unfair for me to name just one director or one film. But there is one film in general that I recommend constantly understanding and watching, and that’s Franco Zefferelli’s "Romeo and Juliet." The magic which he brought through the actors is incomprehensible; it is absolutely stunning. But again, I like Zemeckis’ "Forrest Gump." I like so many things, so I can’t just say one particular thing. Even though I’m a filmmaker, and I know the magic of making films, there are some that stand out as quite touching, and it is the human story that moves me. And those directors that make that happen, obviously, are my favorite.

Writer/Producer Neringa
You can’t have a movie without a story; you can’t tell the story without actors; you can’t film the film without a DP; and ain’t nothing gonna happen without a producer’s money: This age-old debate goes on, but people who have worked on a set know who really makes the heart beat: the cook. As the chef (and did I mention writer/producer?) on "Eternal Embrace," Neringa fed the story’s stomach – and spirit.

LF: What brought you to write "Eternal Embrace"?

NERINGA: I was at a romance writer’s conference about eight, nine years ago, and a production company approached me and asked me to pitch a couple story ideas for a new television series. I came up with three storylines, and this is the one they wanted me to write out into a 30-minute story. They loved it, but the series didn’t sell. A couple years later, I joined the Harvard Square Scriptwriters, and [HSSW’s] Laura Bernieri said, "Why don’t you turn it into a feature?" And that’s what I did.

Later, I came back to the idea for the television series because the most integral part of romance is getting into the head, the thoughts of the protagonist, and in a visual medium you can’t do that without a lot of narrative. It took me two or three years to come up with The Rogue/Spirit as a concept for basically reading the protagonist’s mind so she can’t lie to him; he knows what’s going on. So her thoughts become visual and dialogue. In the feature film version, the poster becomes a portal to her world of thought, which you can’t do in 30 minutes.

LF: Do you have an outline for other episodes? How does this story continue?

NERINGA: I am putting two pitches together, a five-year plan, a series bible for The Romantic Spirit, where the Spirit takes on another person. He will move from an object to a person, and you can’t lie to that person. The Romantic Spirit basically attaches itself to the protagonist every week to see what’s wrong in their lives and how to solve it, with love as the basic theme, whether it’s self-love, selfless love, family love. Each year I’ll have different themes.

LF: You decided to hire a line producer; how did that help you as a first-time producer?

NERINGA: Bert Brown brought the combination line producer/associate producer/unit production manager; he brought the know-how. He had 25 years of knowing what goes on prior to that. Ziad had a lot of the marketing, but they backed each other up and supported each other. Bert did a lot of the paperwork, telephone calls, just made me aware. And he was like an encyclopedia of film. Even though he and Ziad both have their creative sides, they just complemented one another perfectly.

When I spoke with Bert, we got along very well, and he also liked the project. I’m flattered that this many people read the script and still agreed to do it! [Laughs]