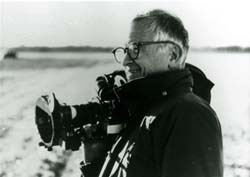 Share
The Boston Film and Video Foundation Honors Albert Maysles who boasts over three dozen films to his credit, including 'Gimme Shelter' about the Rolling Stones.
One of America’s foremost nonfiction filmmakers, Albert Maysles, along with his brother and partner David (1932 – 1987), has been recognized as the creator of "direct cinema," the distinctly American version of French "cinéma verité."

Al Maysles and Maysles Films count over three dozen films to their credit, including Gimme Shelter on the Rolling Stones and their trip across the United States which culminated in the tragic concert at the Altamont Speedway; Grey Gardens, the recently re-released and once highly controversial documentary on the haunting relationship of the Beales, a mother and daughter living together in a decaying East Hampton mansion; the landmark documentary Salesman, a portrait of four door-to-door Bible salesman from Boston which is regarded by many as the classic American documentary. Salesman was chosen by the Library of Congress in its list of 25 of the top American films saluted for their historical, cultural and aesthetic significance in December, 1992.

Al Maysles was born in Boston and raised in Boston and Brookline. He attended Boston Latin and Brookline High and earned a B.A. at Syracuse and M.A. at B.U. in psychology. He has had innumerable grants, honors and awards for his work and his contribution to American filmmaking.

A Profile of Al Maysles

Al Maysles is a teacher, He teaches you to wait and the truth will out. His camera is patient. His eye believes. Truth for him is letting people be. How can a Jew practice Zen? Watch Al Maysles think, hold and shoot with ohmm in his gut.

I remember a scene in Abortion: Desperate Choices which won a Prime Time Emmy and a Peabody in 1992. This young woman was too poor to have her baby. Her partner waits for her abortion to be over. She leaves the operating room, Al follows her with his camera. A small elevator opens, the couple embraces tenderly – just for themselves, for no one to see, But Al captures it on film. He is there, yet he is invisible. In a small elevator he shoots private, gentle shots that ring of true sadness. Does behavior change what a camera shoots? When Al Maysles makes a documentaries people behave as people and he captures life at its core. There is no performance.

It is good to have a genius in our midst. It makes honest people of us and gives us all something to strive for. Al is a poet and a humanist. And, even though he wears a leather jacket in sweltering heat, he’s one cool guy.