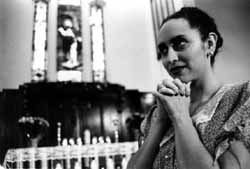 Share
A new all-independent, all-local film festival sprouts up in Boston.
Memories of the Nantucket Film Festival have faded with the summer sun. The Boston Film Festival has come and gone. But the chance to see fresh, provocative, out-of-the box filmmaking continues. And it’s happening just down the street – Mass. Ave. in Boston, to be exact.

Iovino spends most of her time with her video production company, but stays connected to the Boston film community by working on local film productions whenever she can. "I met Joseph on a film set, and he mentioned that he was interested in organizing a film festival. I was really intrigued by the idea of doing a truly local film festival that donated its proceeds to charity. But we also didn’t want to get lost in the film festival crowd – we wanted to give ours a personal, interactive feel," she explained. To do this, they set out to create a film festival that was distinctive in three ways.

First, they decided that all proceeds from tickets sales, corporate and independent sponsorship, and merchandise sales would go to charity. They decided on two beneficiaries – The National Breast Cancer Foundation and The AIDS Action Committee.

Their second objective was to pay tribute to local independent filmmakers, while at the same time educating the public about the art of independent filmmaking. "When we starting the planning stage," Iovino explained, "I asked several filmmakers what they liked and didn’t like about the festivals they’ve attended and why. They agreed that the best festivals make the filmmaker a big part of the experience."

That’s why every film screened at the festival will be followed by an audience Q&A with the filmmaker. In addition, festival-goers can attend workshops which focus on specific filmmaking topics. In one workshop, three documentarians who’ve ‘been there and done it’ will discuss the trials and tribulations of making a personal documentary. In another, HB Communications will demo the latest Avid editing technology.

Another important objective for Iovino and Gatto was to avoid making the filmmakers and audience bear the brunt of festival costs. "A lot of festivals charge the filmmakers entry fees. But we purposely decided not to – after, all, the filmmakers have spent enough money getting their films done. We also wanted give the public a chance to experience new independent filmmaking at an affordable price."

After months of hard work, the twosome rallied the support of Cellular One, Avid Technology, and other corporate sponsors as well as local theaters to bring the festival to life and keep the prices of tickets low. Festival-goers can purchase tickets for just $10 per day and $35 for the entire festival.

Last but not least, they accepted only films that were representative of the spirit of filmmaking in Boston and had some tie to the Boston area. This means that a cast or crew member is local to Boston, the shooting took place in or around Boston, or that the film was produced in Boston or anywhere else in Massachusetts. "What we ended up with is a great range of subject matter and formats – from a black noir film about black-on-black violence to a documentary about India to animation films, which use everything from puppets to charcoal drawing and photography," Iovino said.

She also emphasized that the festival is non-competitive and tries to avoid labels. "There’s a short entitled "Holy Tortilla" which is directed and produced by Lauren Ivy Chiong, a recent graduate of Boston University’s graduate film production program. It’s a great film with high production values – student film or not. We didn’t want to diminish her work by putting it into a student category." ("Holy Tortilla" was also screened in the New England Film and Video Festival earlier this year.) In the process of viewing the entries, Iovino also avoided reading the filmmakers’ bios until afterwards. "My selection process was based on the quality of the filmmaking, not on whether the director had done other films or if they had had won any awards before," she said.

The festival will feature several award-winning film and premiere screenings. A total of 24 films are scheduled, including six features and an assortment of shorts and animation. Films will be screened at four different venues: Friday, Oct. 10, from 5 to 11 pm at the Belmont Studio Cinema; Saturday, October 10, from 5 pm to 11 pm at the Arlington Regent; Sunday, October 11, from 11 am to 5 pm at the Harvard Film Archives; and Monday, October 12, from 11 am to 3 pm at the Coolidge Corner Cinema. Tickets can be purchased via the official festival web site, www.maff.com or at theater box offices during the festival (Note: Director Paul Boghosian’s international thriller "Under Current" has been recently added to the program and will be screened at the Coolidge Corner Cinema on Monday, October 12.).