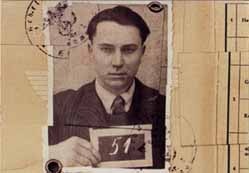 Share
Mary Kocol's unique and visually beautiful photo animation film 'My Father's Story' will screen this month on October 17 at the Museum of Fine Arts, Boston.
The inherent challenge in the creation of any interview-style documentary film is twofold. The story itself, and the way in which it’s told, should be unique and interesting, and the visuals need to be both informative and relevant. "My Father’s Story," by Mary Kocol, makes great strides toward these two goals.

The story – that of a Polish, presumably Catholic, boy coming-of-age in Poland before and during World War II – is interesting, especially in reminding us that non-Jewish Poles also suffered in WWII (Kocol’s father was forced to work in first a German sugar factory, and later a battery factory). Her use of her father’s Nazi-issued work permit and metal "P" tag (for "Polish") as central images of the film is powerful, especially since we see that he still has in his possession these icons of Nazi Germany’s control and efficiency. And his recollections of a lifelong separation from his family, and of being shot by the Germans during his rescue by American troops, bring to life the personal losses and hardship that occurred in WWII.

"My Father’s Story" is told visually through photo-animation mostly, a process in which photographs, having been cut up, are pieced back together on screen; a process that is, in its disjointed manner, a metaphor for the act of piecing together a personal history from a series of memories which themselves are often sketchy and half-remembered.

Overall, "My Father’s Story" is engaging, but ten minutes is hardly enough time to make a dent in someone’s personal history, and Kocol chooses a middle ground that somewhat lessens the impact of her father’s story, neither including his entire life (his almost half-century living in the U.S. is only touched upon) nor focusing only on the war years (which would seem to be the most formative). "My Father’s Story" is visually beautiful, but definitely leaves you wanting for more of the ‘story.’