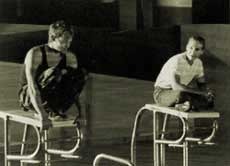 Share
Sure, it's great to make a film – but it’s even better to get the darn thing sold and seen. So, for a week in New York, hundreds of films and scripts are looked over by about 1,500 industry professionals from around the world. Here's the highlights.

"You sort of yearn for the days when you’re making your first grungy movie," said filmmaker Brad Anderson on the first day of the Independent Feature Film Market (IFFM), "but not that much."

Clearly, that’s the attitude of the filmmakers who bring their films to the IFFM. It’s great to make your film no matter what it takes – maxed credit cards and all – but it’d be even better to get the darn thing sold and seen. And, essentially, that is the purpose of the IFFM. For a week in New York, 101 features, 71 narrative works-in-progress, 51 shorts, 63 documentaries, and 110 scripts are looked over by about 1,500 industry professionals from around the world.

It is not a festival; it is a market: filmmakers and screenwriters pay to have their work shown there, and distributors and other industry leaders come looking to buy. As a result, the atmosphere takes on the quality of any other "market" – there are the frenetic "market peddlers" (the filmmakers) handing out flyers, dressing in costumes, wooing people into their "booth"; and then there are the semi-interested passersby (the distributors) taking the flyers, stopping in for a brief look at the goods, and making their way to the next booth.

Now, don’t get me wrong. Sales are made. But it is not the costumes, the flyers, and free candy that closes the deal. These might get them to stop in, but what gets them to reach into their pockets is another story. The Market, now in its 20th year, has featured success stories like, to name just a few, "My Dinner with Andre," "Down by Law," "Slacker," "Clerks," "The Brothers McMullen," and the 1997 IFFM film "Blood Guts Bullets & Octane" (which will be released this fall by Lions Gate Films).

And, of course, some "booths" are more popular than others. In one case, the theater was packed so full, people sat on the floor. At others, there were only a handful of people in the 200-seat room. Yet in every film, there were people who walked out after the first ten minutes, wandered in during the middle, or (imagine this) sat through the entire screening.

Personally, I hate seeing only half of a film – and to me, there’s no point if you’ve missed the beginning. So for the first two days, I saw every film from beginning to end. But the culture of distraction gets to you. Since I was going to be there for only half the week, I stopped "wasting my time" on films that didn’t grab me. This wound up having a domino effect — once I had left one in the middle, the others had already started, so I had to enter during the middle.

How it Works
Unlike a film festival, where films are carefully selected for entry, here filmmakers and screenwriters pay to screen their work as part of the Market. Works fall under the categories of features, works-in-progress, shorts, and documentaries. To give you some idea, entering a feature film runs about $500 and a screenplay about $400. For films, the cost includes a screening at the Angelika Film Center in New York. Both include a write-up in the Market Guide Book (about 300 pages thick, so your description had better be good), attendance fees for the week-long Market, and inclusion in all press materials of the Market. According to the Independent Feature Project that sponsors the IFFM, there actually is a screening committee comprised of event directors, but since it is a market and not a festival, nearly all are accepted (over 95 percent).

All screenings take place at the Angelika Film Center in New York City. Most people who attend are filmmakers, screenwriters, press writers, and distributors, although anyone can buy a day or week pass to the event. Since day passes run $75, there aren’t many non-film people strolling in. Everyone attending receives a badge which is color-coded (i.e., orange = potential buyer; purple = filmmaker; blue = press). Any time someone walks into the film, even if its for five minutes, someone at the door writes down his or her badge number. A few weeks after the screening, each filmmaker receives a list of all the individuals who attended his/her film in order to follow up, which is highly recommended. Time slots seemed to be a key factor in attendance. Those in the afternoon were much better attended than those at 9:00 a.m.

There is also a separate venue across the street – the Video Library. No filmmakers are allowed in, so the atmosphere inside is subdued enough to feel much further away than across the street. Here, there’s a video copy of every film and video and a copy of every script at the Market. Industry buyers can reserve three-hour time slots for a private booth with a headset to watch as many videos as they want. Every time I visited, there were a few people reading scripts in the lounge, and the booths were either mostly or entirely booked. According to one of the volunteers, someone from Warner Bros. spent a whole day there. Here, as in the screening room, the Market organizers keep track of who has watched each video in order for the filmmaker to receive a list later.

So how do distributors choose among the hundreds of films to see? Everyone seems to have his or her own method for choosing the few they do see. Some try to see as many in a certain genre or from a certain locale. Others choose films with intriguing descriptions and photos in the guide book. And still others choose films featuring familiar actors or by familiar directors. But most do not stay to watch the film in its entirety, even when interested. Several people said that if they wish to see the entire film, they leave a note in the filmmaker’s mailbox (every filmmaker & distributor gets a mailbox at the theatre) or contact the filmmaker after the Market (the guidebook lists each filmmaker’s address and phone).

The whole package – film screening, promotion of your film, industry attention, panel discussions (including a "Meet the Buyer" series), attendance at the Market, and a comprehensive Industry Directory of all the companies in attendance – is well worth the few hundred dollars. After all, once you’ve spent all that money making your film, what’s a few hundred bucks spent promoting it?

Highlights from the ’98 IFFM
Overall, I was impressed by the quality of the films at the IFFM. For example, "Mystic Nights & Pirate Fights" and "When it Rains…" both had some breathtaking cinematography. The documentaries category featured several terrific films, including a short piece, "Taddo," about the oldest barber in Brooklyn. The student showcase, which was jammed with people, featured several wonderful films, including "17 Years to Earth," "The Vanishing Point," and "Asa Nisi Masa." Of the New England films, there were two about hilarious depictions of filmmaking itself: "I Love My Movie" and "Road to Park City."