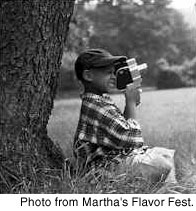 This August, there’s something film-related going on in just about every town, so it’s the filmmaker/film buff/burgeoning film-whatever’s lucky month…

Legislation
Providence, Rhode Island Mayor Cianci, with the support of our Providence delegation, has proposed legislation that, if passed, will provide a potential funding source for independent filmmakers. Under the bill (98-H 7931) a 25% tax credit would be provided to Rhode Island taxpayers who invest in films with total production budgets of $5 million or less. This will provide a significant incentive for investment in films whose primary locations are in Greater Providence. More films will bring more work for our local talent. They need your help to get this bill passed. Call, write, or e-mail your legislator today and voice your support for H -7931. To find out how to contact your legislator, visit http://www.sec.state.ri.us/RIELEC/FINDOFF.htm

Events
Martha’s Flavor Fest, an independent black film and script competition based on the island of Martha’s Vineyard, takes place on August 19-21. As the premiere vehicle of Independent Black Film, they have scheduled a solid program of screenings, script readings, symposiums and panel discussions that are designed to add to the recognition and support needed to further expose the Independent Black Filmmaker & Screenwriter. For more information, visit their web site at http://www.marthasflavorfest.com

The Woods Hole Film Festival in Cape Cod starts August 1st and continues until the 8th. Woods Hole, which contains only regional independent films, kicks off with Maureen Foley’s Home Before Dark. The film, starring Katherine Ross, Brian Delate, and Stephanie Castellarin, is about growing up in the tumultuous 1960’s. Dark is the first of many other films, such as Dennis Lehane’s Neighborhoods and Catherine Burns and Alan Piper’s Starving Artists.

The Rhode Island Film Festival in Providence and Woonsocket, begins August 13th and runs until the 16th. For more information, call 401-861-4445. And, watch at the end of the month and the beginning of September for the American Film Registry to land in Vermont. The touring Registry will start with a guest appearance from James Earl Jones, and a screening of the film 2001: A Space Odyssey.

On the "educational" side, there’s a variety of lectures and meetings for filmmakers. The Annual Film Forum, which is in Vermont on September 12th, prepares people for breaking into the film industry. There will be panels, discussions, and networking for the up-and-coming filmmaker. Also in September, The Paradise City Media Collaborative will conduct a series of seminar-type workshops on grant-writing, distribution, and web page design for videomakers.

On August 7-9, the Providence Film Commission will sponsor the New England Screenwriters Conference in Providence, RI. It will be held at the Westin Hotel – for more info call 401-751-9300.

The Association of Independent Video and Filmmakers’ local salon will feature guest speaker Entertainment Lawyer Sandra Forman on August 6 at 7 pm. The event will take place at the Center for Independent Documentary at 1608 Beacon Street in Newton, Massachusetts. Sandra Forman has also agreed to hold two more legal "clinics/seminars" at salon meetings on Thursday Thursday October 8, and Thursday December 10.

Grub Street Writers present a screenwriting seminar with Leslie O’Flaherty, Emerson College professor and former writer for the Roseanne show on August 15. The seminar covers such essentials as formatting and scene outlines as well as the classic elements of drama, character development, story structure, dialogue and conflict. For more information call 617-623-8100.

Recent News
Kim Foley, of the Persistent VISION Film Festival has developed a web tour for independent and student filmmakers that takes one to great web resources and annotates the sites as they are visited. This innovative project takes you to some of the best resources for aspiring filmmakers on the web (including NewEnglandFilm.com as stop #7). You can see it at http://www.tramline.com/tours/filmmaking/

The Vermont International Film Festival – which has mostly Foreign films, rather than Domestic – stopped accepting entries on August 1, so their line-up should be announced soon.

The Paradise City Media Collaborative recently held their monthly meeting on July 28th, where they screened the documentary The Learning Tree, by award-winning editor Rikk Desgres and Joany Kane. Also, the weekly series at Bill’s Bar continues every Monday night at 9:30 P.M. In August, the theme is "In and Out" (as in Independent and Outrageous).

Alisa Shapiro will be leaving the Women in Film and Video Board by the end of the summer. Producer Lucia Small will be joining as a new board member. An important note to new or returning WIFV members – the price will jump from $50 to $75 in September. Renew or join now to get the lower price. Membership will include free admission to six out of eight of their upcoming events and workshops throughout the coming year. Contact WIFV at 617-924-9494 or wifvne@shore.net.

Film Shoots
Filming around New England is plentiful, as well. There is word that Miramax – although the studio won’t confirm it – will begin shooting Ciderhouse Rules, by John Irving. They just rented out office space for six months in the North Hampton area. The film will be co-produced by Alan Bloomquist (What’s Eating Gilbert Grape?). In Connecticut, the independent film, All Shook Up, is shooting. The film is directed by Eugene Celio (Hippies and The Visitation), and stars Bess Meyer, Kristen Griffith, and Seamus McNally. Written by Christian Mitchell, the story is about the twists and turns a woman’s life takes. It films until the end of July.

So, get out there and flock to these events. They will all be worth your time and energy…and let’s face it, they’ll probably be air-conditioned too.