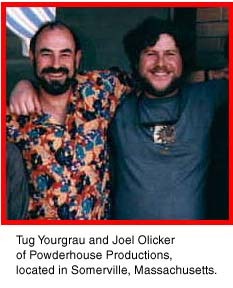 Share
Learn how this Somerville, Massachusetts company has been able to produce programs that air on PBS and the Discovery Channel.
Taking its name from the revolutionary war relic — the Somerville Powderhouse — Powderhouse Productions was created in 1994 by industry veterans Joel Olicker and Tug Yourgrau. Since then, they have produced documentary and dramatic programming for broadcast, cable, corporate and institutional clients. Many of their productions have aired nationally on PBS via WGBH in Boston, including a special on South Africa, which was produced following their 1994 elections.

Joel Olicker, President of Powderhouse, brings a wealth of experience in documentary production to the company, having served as editor on such popular PBS series as Nova, Frontline, The American Experience and many others. Before that, he worked in New York City for ABC and for CBS on the series Captain Kangaroo.

"After working at WGBH for seven years, Tug and I both found ourselves at a point where we wanted to try something more independent. So, we decided to give it a shot, start the company and …. we’ve been juggling multiple clients ever since the doors opened."

The crown jewel in that "juggling" act remains the "edu-tainment" television series, Discover Magazine, airing Wednesdays at 9 pm on the Discovery Channel.

"We’ve been with the series since the beginning," states Olicker. "We’re one of three or four production companies that are regular producers for the series."

And how, exactly, does one put together a popular national magazine show?

"We’ll come up with a topic and propose it to the channel. Sometimes they run with it … and sometimes they’ll come to us with a topic … usually no more than a one-word topic or idea. Then we’ll develop stories. We’ll do a lot of research on the web, every major library in the area. Also, by now, we have quite a network of people that we can call … attorneys, medical doctors, judges .. people who have access to ‘what’s happening.’"

Interestingly, for every story that graduates to the development stage, there were 20 or 30 stories that were initially under consideration.

"It’s a matter of finding a story that’s not only compelling … that will hold an audience, but also one that we can use to educate viewers in some area of science, because that is our mission, ultimately."

Along with the national exposure via the Discovery Channel, Powderhouse has also produced video projects for local businesses and institutions. One such project was an award-winning teleplay produced for the Harvard Business School.

"We did a series for them of management consulting videos that were designed to be distributed to Fortune 500 companies," explained Olicker. "One of them was a full-blown teleplay about a fictitious corporation that was undergoing some radical changes and [centered on] how the senior management team had to negotiate with each other to resolve some of the conflicts."

The video, which has since earned cult-classic status in the business community contained some elements of the "dramatic" courtesy of Olicker’s partner, Tug Yourgrau.

"He’s vice president of the company and he’s also a playwright. He’s written a number of plays, one of which was produced on Broadway. He was nominated for six Tony’s. His love is the ‘dramatic world.’"

On a community level, Powderhouse has made contributions by providing an opportunity for a professionally produced video at little or no cost to worthy organizations.

"One thing we try to do, when we can, is to do projects for organizations in the community that otherwise couldn’t afford to do a video. We did something last year for an organization called Teen Empowerment, which works with inner-city teens. Now we’re doing something for a daycare provider. These are organizations that want and can use a video to show their funders, but don’t have a budget," Olicker said.

"We can also generate something that’s useful to the community. It gives us something to do that isn’t just purely about dollars and cents," he adds..

The company’s ties to the community also extend to using Boston area film crews whenever possible.

"The people that we work with … cameramen, special effects people, pyrotechnics people, gaffers … whenever we do a shoot, it’s like seeing your old friends again. Boston people are great. Whenever we can shoot in town, we feel so comfortable because there are so many talented people to choose from." states Olicker.

Currently, Olicker looks ahead to other exciting projects on the horizon, including a screenplay currently in the development stages. New media opportunities via the Web and HDTV (High Definition Television) have also opened the door to possibilities that have led Olicker to proclaim that "there’s sort of a sense … that anything’s possible. The future for independent producers seems to be quite exciting. Media is exploding in ways we can’t even comprehend."

Waiting to join in the explosion is the aptly named Powderhouse.

Viewers will have a chance to sample the newest Discovery Magazine episodes from Powderhouse this month on the Discovery Channel. Wednesday, January 7 offers ‘Science Detectives,’ while the following week (Jan. 14th) the television magazine will feature ‘Science of Guns.’

Viewers will have a chance to sample the newest Discovery Magazine episodes from Powderhouse this month on the Discovery Channel. Wednesday, January 7 offers 'Science Detectives,' while the following week (Jan. 14th) the television magazine will feature 'Science of Guns.' For more information about Powderhouse Productions contact 259 Elm Street, Somerville, MA 02144; phone 617-629-2200; fax 617-776-7905.