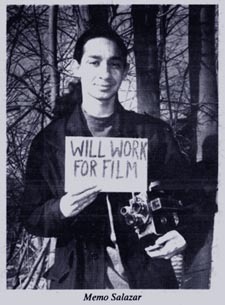 How I Did It: The Story of One Independent Filmmaker’s Experience

Share
Some words of advice and caution from the Massachusetts independent filmmaker of Tragedy of Tonsil.

When I was a kid, I didn’t get to watch many movies. My parents, in their infinite wisdom, didn’t care for them too much (all that sex and violence) and so I became the only kid on the block who hadn’t seen Ghostbusters, The Breakfast Club, or Dirty Dancing on the big screen. When I look back on that now, I’m actually thankful. So many filmmakers today are stuck inside the genre trappings they grew up with that they’ll never be able to produce anything remotely original. Somewhere along the way, I realized that I was a writer. Sometime after that, I realized that I was getting bored with books. I wanted something different — I wanted a medium that allowed you the freedom to say what you wanted to say in an infinite possible ways. As you can probably guess, that’s how I started the long road towards becoming a genuine, bona-fide, card-carrying FILMMAKER.

Rather than going to a $20,000 per year film school, I opted for a little state college in Fitchburg, Massachusetts. It didn’t cost much, but they had 16mm cameras, Nagra and DATA recorders, and… AVIDs. AVIDs that students could use, as opposed to the AVIDs that undergrad students get to watch grad students play with at certain big-name film schools. Needless to say, Fitchburg was my new home. I went through the classes, shot my little films, and learned from my mistakes. At the end of my four years, I had to go on an internship, which provided me with my first Big Decision. Do I go work at some production house for half a year in the hopes of getting a steady job, or do I convince my professors to let me make a film instead, at my own expense?

The answer was, of course, obvious. I made my first long film, Nothing Romantic, which ended up being an hour long. It was shot on 16mm and cut on an AVID. The film has some good and bad performances and some very rough audio spots (what do you expect on a no-budget film?), but is still a funny and hopefully insightful film.

So now I had graduated with a degree in hand. It was obvious that Nothing Romantic was not going to propel me to indie stardom, but it had been a true learning experience for my next one. My next one? Who was I kidding? I needed to get a job now — I was out of school and still working at my cheesy little part-time job at a video store. I needed a life. I sent out some résumés, did some interviews, and ended up realizing that the only thing that I really wanted to do was make another film. So I sat back and wrote The Tragedy of Tonsil, gathered the rest of my life savings, and started to figure out how on earth I could shoot a feature film with nothing.

The general guidelines I’m going to give will probably be of help to anyone out there wishing to make a film, but the specifics probably won’t apply. In my case, the specifics were that I still had connections with my school (ergo, with my school’s equipment) and that I was able to take advantage of a special Kodak offer of "buy 1, get 1 free" film stock for first-time filmmakers. Everyone has their own specific situations, so you can figure those out on your own. The "words of wisdom" that I think will apply universally are these:

Don’t be wasteful / be resourceful.
I know a lot of people think that they aren’t wasteful, but they are. This goes back to the way you’ve been raised from day one. Do you throw a lot of things away that could possibly have some kind of use? You have to keep your eyes open for every little opportunity — every local business you frequent is a possible shooting location — write it into your script. Every piece of flea-market junk you own is a possible key element in your story. Don’t write a scene that you’re not sure how or where you can film it — keep things simple. Keep your cast small and don’t have all your cast members in all your scenes. Your script is the backbone of everything, and throwing caution to the wind during writing is going to co$t you.

With Tonsil, I may have gone too far in the other direction. I shot in all long takes because a) I really love that visual style and b) the negative cutter charges $7 each cut — therefore, a film with 100 cuts costs you $700 but a film with 600 cuts costs $4,200… you get the picture. My films are visual but loaded with dialogue. The combination of long takes, a lot of talking, and a lack of any real "plot" (it does go somewhere, just not in the traditional way) brought my film a lot of praise from film lovers but no praise from the money guys — the Distributors. The bottom line is that my film is not very marketable because my style is so minimalist. That’s not to say that I’m doomed — if you have seen the very wonderful American Job, you know what I mean. That film is even more low-key than mine, and now the filmmaker, Chris Smith, is taking it on a successful self-promoted tour. I know there’s an audience out there for Tonsil, but it seems to fall under the scope of Miramax’s radar. What I’m saying is not "change your script to make it more appealing" but rather "be aware of the realities." So, if you have to pay back the 50 grand from investors, perhaps you should use your most accessible idea first; make a film that is both easy to watch and still innovative and intelligent. For some people, Tonsil is easy to watch but for many others it isn’t — since my name does not carry the recognition of a Jim Jarmusch or a Hal Hartley, festival programmers don’t give me the benefit of the doubt and shut my videotape entry after 20 minutes. Distributors have nothing telling them it’s marketable — at least "a film by Hal Hartley" means a certain small audience is going to watch it. It’s up to you to decide exactly what shape or form your film will take, but be aware of the reality. At all costs, however, be true to your film. Don’t try to appeal to everyone or you’ll end up making garbage.

Be Yourself
Don’t be a schmoozing, plastic-faced facade, either. Be yourself, but make sure yourself happens to be a nice person who treats others with respect. I was lucky to be able to use my school’s equipment to make a film, but part of that "luck" came as a result of me having befriended a lot of people there — people who saw that I really did have a passion to tell my story. Had I been an arrogant ego-maniac, there’s no way in hell people would have offered to help me out. This really boils down to a philosophical belief of how you treat human beings in general, and if you happen to be one of the arrogant jerks of this world, you’d better have a lot of money, an amazing talent and a ton of luck, because no one is going to help you out of love. When it comes to this kind of no-budget guerrilla filmmaking, love for the film and the people involved is what is taking the place of a ten million dollar budget.

Question everything
This is especially important when you’re writing. Why did your character pull out a gun? Is it because it’s an innovative plot technique or because you’re so used to seeing characters pull out guns in those situations that it just seemed like the thing to do? Every step of the way, you should be asking yourself "why?" and "why not..?" The only thing you have to contribute to this world is your unique perspective on things, and if you’re following generic conventions, guess what you’re not doing. I love Reservoir Dogs too, but if I see one more slickly-shot movie with snappy dialogue and gangsters blasting away with a gun in each hand in slow motion (which Quentin stole from John Woo, who stole it from Sam Peckinpah) I’m going to give it all up and become a hermit. Come on, people! Fifth-generation idea copies are not what it’s all about! Show us why you deserve to be the next Big Thing. Come up with your own way of blowing us all away and you will be immortalized among Kubrick, Polanski, Kurosawa, Goddard, Fellini…

Be organized
This is connected with the "Keep things simple" idea; you don’t know how many bigger-budget indies have been made where a few simple logistical things could have saved them time and money. I was on a set of a 35mm indie production where they were having me create key props (I mean, KEY props that the plot rested upon) out of whatever scraps I could find lying around. And they needed them in ten minutes! Needless to say, the end result was a film full of inconsistencies and plot holes. Make sure all of that stuff has been carefully planned out. If you did keep things simple, then you shouldn’t have that much to worry about, right? I prefer to shoot with the tiniest crew I can have — a few actors, a few key filmmakers, and that’s it. Less people to feed (did I mention food? ALWAYS have someone in charge of food — people will work for free if they love the film but they won’t work for free if they’re starving) and less people to appease. Also make sure someone is logging everything in a notebook, from the continuity of the shots to the amount of footage used each take — you will save a lot of hassles in the editing room.

Well, that’s it for the basics, really. I can tell you specifics about how I found actors, but most of that stuff ends up being irrelevant anyway — you’ll find your own way to do things. I basically collected my filmmaking friends, rehearsed with the actors, and shot Tonsil in 9 days (not even full days!). I cut the film first on video and then, when a friend put up some money for a film print, on an AVID film composer. Thanks to a lot of free, generous help and my own resourcefulness, The Tragedy of Tonsil was made for… well, I hesitate to give the amount in the possible event that my film does garner some kind of distribution, but it wasn’t that much at all. If you really want to know, give me a call and I’ll tell you. The bottom line is that I made a film print and was able to go to the 1997 Independent Feature Film Market in NY, where I met a lot of other filmmakers who had gone through similar things to get their little masterpieces completed.

YOU CAN CONTACT MEMO SALAZAR THROUGH HIS PRODUCTION COMPANY, XIMIX PRODUCTIONS
BY PHONE: 508-898-1311
BY E-MAIL: xximixx@juno.com
OR THROUGH HIS WEBSITE: www.net1plus.com/users/clashua