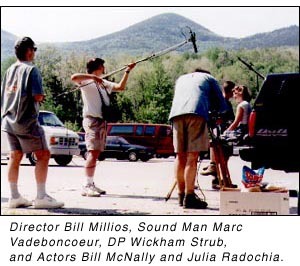 Making it His Way

Share
Having connections doesn’t have to mean you know someone in Hollywood. New Hampshire filmmaker Bill Millios had 'connections' with a couple of budding filmmakers from the Manchester Public Access station and a fellow graduate of the University in New Hampshire..

Having connections doesn’t have to mean you know someone in Hollywood. New Hampshire filmmaker Bill Millios had "connections" with a couple of budding filmmakers from the Manchester Public Access station and a fellow graduate of the University in New Hampshire. Together, they collected their funds to create Old Man Dogs – a romantic ghost story set against the beautiful backdrop of New Hampshire’s woods and mountains.

"This is what you call really independent – with no connections – grassroots filmmaking," Millios said. "Nay-sayers said I could never do it, that the crew would lose enthusiasm." Well, the crew didn’t lose enthusiasm, the production went as planned, and a few months later, the 16mm film was in the can.

"It was great, we proved everyone wrong." Bill Millios, who had begun modestly with taking a few courses at the Boston Film • Video Foundation and producing a couple of documentaries for public access television, now had written, directed, and produced his own feature film.

This summer, it premiered to a sold-out crowd at the Coolidge Corner Theatre and earned the honor of being the opening night film at the 8th Annual New Hampshire Film Festival. But suddenly that darned distribution obstacle reared its ugly head.

"We went to the IFFM [Independent Feature Film Market] in New York and got a couple of bites. But it’s kind of frustrating. You can only just wait and see." Well, Bill Millios is not a "wait and see" kind of guy, so he decided to take matters into his own hands.

After a long conversation with Vermont filmmaker John O’Brien, Millios knew what to do. He began plans for the packaging and distribution of Old Man Dogs on videocassette, which became available in local stores on December 1. Millios hopes that as one of the few finished feature films completely shot in New Hampshire Old Man Dogs might be able to capture the locals’ hearts much as O’Brien’s Man with a Plan did.

The success of its limited run in Concord, New Hampshire bodes well for the recent video release. "The film got a better response in Concord than I expected. I thought in this "Live Free or Die" state, it might not go over that well – I mean one of the characters is a vegetarian. So I thought people would grump their way out of the theatre, but they were very responsive to the spiritual aspects of the film."

Now that the tapes are in stores, is really is a matter of "wait and see." "Like O’Brien said, it’s basically an endurance test."

"You’re never going to get everyone to like your film," he admits. But then, the beauty of independent filmmaking is loving it yourself – in addition to winning an audience.

"You can have three pages of the character talking by a window and no one will complain about the action beats. In a way, [Old Man Dogs] was a selfish movie because we did exactly what we wanted to do."

As he continues to market the video release and submit the film to festivals worldwide, Millios has already begun work on his next feature Dangerous Crosswinds which compared with Old Man Dogs is more plot-driven, with more locations and actors. Having storyboarded almost the entire script, Millios is currently raising money for the film and plans to start shooting on the seacoast of New Hampshire in early 1998.