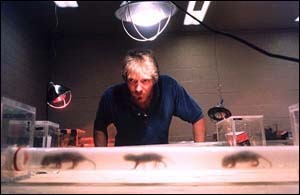 Fast, Cheap & Out of Control: A Review

No image is too odd for Errol Morris’ camera. Multilegged insectlike robots, human and animal circus performers, a black-and-white adventure series that is part Tarzan and part Plan 9 from Outer Space: all are paraded across the screen before the opening titles. In the magnificent documentary Fast, Cheap & Out of Control (the name refers to a paper presented to the British Interplanetary Council, not to the loss of family values in western civilization), Morris goes after the meaning of life, and being along for the ride is as rewarding as the discovery itself.

Through interviews with four seemingly disparate men — wild-animal trainer Dave Hoover; topiary gardener George Mendonca; mole-rat scientist Ray Mendez; and MIT robot scientist Rodney Brooks — Morris makes sense out of nonsense, order out of chaos, which, we learn, makes life — life. The four subjects share not only an infectious love for their work (mole-rat expert Mendez, a dead ringer for Jon Lovitz, actually lives in his lab, alongside his hairless, tunneling mammals whom he affectionately calls "my vermin"), but also a desire to understand their environments. In so doing, they gain an understanding of human nature and of life in general.

The meaning of life could be heavy stuff, but never once does the conversation drag. This is due in large part to the marvelous score by Caleb Sampson, a founder of the Boston area’s Alloy Orchestra, acclaimed for its live musical accompaniments of silent films such as Metropolis and Nosferatu. The music is a constant, and coupled with the seamlessness of Morris’ connections, what first seemed like random, unrelated images at the beginning of the film fall into place as Fast… progresses.

Errol Morris’ genius lies in his ability to weave it all together — music, image, and interview; in other words, to make order out of chaos, to make a film as lifelike as it is life-affirming. Gardener Mendonca says of his animal-shaped plants that the heads are the easiest part to do because all plants just want to grow upwards. By watching Mendez, Hoover, and Brooks also interact with their beings, "carbon-based" or not, we see men fascinated with behavior, order. What they tell Morris, and what Morris in turn tells us, is that order is not something that has to be imposed. It is there, in the nature of things; all we have to do is look for it.