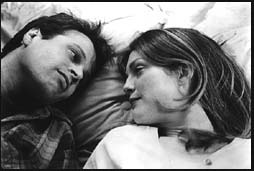 The Carrie White Show premiered on September 16 – evoking non-stop laughter from the crowd that gathered in the conversely serious Locke-Ober. The first episode of this zany "mock talk show" centers on the topic of pre-pubescent beauty queens and contains pseudo-commercials à la Saturday Night Live. Christy Scott definitely stole the show as the self-centered host, Carrie White. According to Director Ed Slattery, the show was scheduled to air this past month in Los Angeles, but it was considered a bit too risqué for the network’s apparently religious audience.

The Boston Film and Video Foundation has begun their fall courses. For a complete listing of current courses, visit http://www.bfvf.org.

The New England Film and Video Festival is now accepting entries for their 23rd annual festival to be held in April. Films must be in the following formats: 35mm, 16mm, S8, 3/4", 1/2", Beta, Hi8. For more information and application, contact the Boston Film and Video Foundation at 617-536-1540 or http://www.bfvf.org.

The National Educational Media Network (NEMN) Apple Awards: Film & Video Competition offers an early bird discount to submissions before November 1. Entries should be educational media titles designed for the home market, or for classroom or corporate use. Visit http://www.nemn.org for more information.

The Massachusetts Film Office is accepting entries for its 2nd annual Locations Photo Competition. Applications and rules are available by calling 617-973-8800. The deadline is October 2. http://www.magnet.state.ma.us/film/contest.htm

The film The Myth of Fingerprints which made its debut at the Sundance Film Festival opened on September 19. The film starring Noah Wyle and Julianne Moore was shot entirely in Maine. http://www.spe.sony.com/classics/myth/synopsis.htm

Local Sightings will host an independent film screening at the Oasis on Hancock Street in Quincy, MA on September 22. Call 975-3361 for details.

Events & Festivals:
The Mass Media Alliance will host an event on October 14 at Filippo’s restaurant in the North End. Esther Luttrell, president of Screenwriting Partners Unlimited, who’s coming from California to Concord for a weekend workshop (October 18-19) with Anne Marie Gillen (exec.producer, "Fried Green Tomatoes"), Donald Gold (producer, "Miami Vice") and Barbara Sandy (who helped develop "Seven") will speak about her workshop and offer discounts to MMA members. Joining her will be Boston attorney Joel Shames who will speak about what to do after you’ve made the deal. Filippo’s is at 283 Causeway Street. Call 617-742-4143 for directions. http://www.mass-media.org/

Forty-seven films and videos out of the 300 submitted will be screened during the Northampton Film Festival on November 6-9, 1997. The line-up of premieres and award-winners will include features, documentaries and animations. A special Women in Film and Video celebration on November 6 will include screenings and filmmakers and actresses such as Patricia Neal, Olympia Dukakis, and Maureen Foley, who will be on hand for questions. Special discounts are available for tickets purchased before October 25 http://www.nohofilm.org

The Green Mountain Independent Film Festival 1997 will be held on November 7-13, 1997. If you have questions email Cindy Leung at greenr@together.net or call 802-223-7330. GMIFF ’97 is a Vermont-based, nonprofit event with support from the Vermont Film Commission, The Savoy, Green Research Inc., Watercolor Designs and New Media Factory.

The new Vermont Film Commission is working on a comprehensive production guide. They are aiming to be online in the fall. If you want to be listed in the guide or would like to receive a print copy, email vtfilmcom@gate.dca.state.vt.us. Also, Vermont will be attending ShowBiz East Expo on September 25-27at Jacob Javits Convention Center in New York City. Find them at Booth # 660.

The Providence Film Commission will be at this year’s Show Biz East Expo on September 25-27at Jacob Javits Convention Center in New York City. Visit them at booth #636.

On September 25-27, the ShowBiz Expo NY features the largest, most comprehensive exhibit of more than 200 production-related products and services, together with a highly respected professional conference. Held at the Jacobs Javits Convention Center in New York City. Contact: 800-840-5688; http://showbiz.reedexpo.com/newyork/index.html or email inquiry@showbiz.reedexpo.com