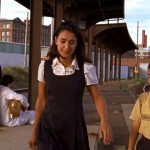 Amal is a sixteen-year old girl who has fallen a year behind in school due to illness. When she learns that her favorite teacher is leaving, she recruits her classmates to decide on a going-away present for him. Meanwhile, her little brother, Bilal, thinks that their uncle, who will be visiting soon from the United States, is actually Santa Claus. He would like nothing more that to receive a toy car from this visitor from far away. When Bilal’s anticipation turns to disappointment after a family dinner, his father decides to make a significant sacrifice to make his son happy. After much searching, and a sacrifice of her own, Amal finally finds the perfect book for her teacher. It is only after he opens the book that Amal learns of the power of generosity.