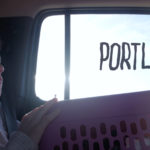 Matt Portle and I started off as strangers. This narrative documentary is about how we became friends.
Won Best Short-Film at the Mass Reality Check Salem Film Festival