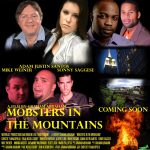 Franklin flees with his wife Katherine and daughter Emma from New York City to the mountainous countryside to defect from the malicious Woodlawn Crime Family mob that is led by the evil Don Gatti. But 6 years later the mafia discovers them and a murderous game of cat and mouse ensues. It is up to FBI agent Bob, who Emma falls in love with, and agent Dylan to protect Emma and her family as witnesses from the gangsters.