Sometimes a man's mind can become a House Of Dreams...

Sometimes a man's mind can become a House of Dreams...

As Henry’s dream world and waking world collide, he is haunted by his dark side as he longs for a sense of goodness in the world.

House of Dreams is a short film that explores the inner workings of a man’s mind - a man who feels lost, whose inner self wants answers to questions that the outward self he projects to the world can't quite get a grip on. The film asks questions about consciousness, about existence, and what it means to be a human being in these times without presuming to provide answers for the viewer.

The film delves into the mind of a man, played by Jeff Hansen, whose waking world is colliding and overlapping with his dream world. Dream sequences mesh with reality as our main character, haunted by his dark side, longs for a sense of goodness in the world.

As we explore his thoughts and dreams we witness his struggle and come to recognize the increasingly thin line between his dream world and his reality.

Speakeasy follows three unlikely friends as they open an illegal underground bar, after the US Congress has reinstated prohibition.

Speakeasy takes place in the future, after the United States Congress has reinstated prohibition. Our story follows Jane, a poor single mother, who is in dire need of money. She decides to open a speakeasy, an illegal underground bar, with her friends Warren and Robin. The speakeasy becomes a huge hit, because of its diverse clientele and welcoming atmosphere. However, when the speakeasy is threatened by an unknown enemy, both money and friendships are at stake.

The true story of Whitey Bulger, the brother of a state senator and the most infamous violent criminal in the history of South Boston, who became an FBI informant to take down a Mafia family invading his turf.

A couple has a falling out on their anniversary, filmed in extreme closeup.

The film is shot entirely from the bottom lip to the bridge of the nose. While the story is relatable and easy to follow, the film gives you the opportunity to focus more closely on body language and micro-aggressions. Plus, how often do you get the chance to watch someone's mouth as they talk?

Short film which depicts an 13-year-old suburban white girl who trusts the wrong person, makes a critical error and ends up sold into sex slavery. Although she will eventually be rescued, the physical and emotional damage will already have been done.

Currently, we are in need of your help. We are seeking sponsors to help us raise funds. All of our actors and crew will be donating their time and talent to this project. Even with volunteers, a film is not an inexpensive project. We need the help of people like you who care what happens to our young people. With Sponsors, Nivasa can produce a higher quality film that can then be given to more schools around the country.

Please check the link to make a generous donation to our campaign and help us bring this film to life.

I sincerely thank you in advance for any help that you can give us. Please let me know if you have any questions.

Far Away is a story about people living away from their home in foreign lands.It is about their inner feelings and the subtle moments in life where th

film is a glimpse into the life of immigrants who move to the USA by different means to live the “AMERICAN DREAM”.

It portrays one night in the lives of three India immigrants RITIKA, KABIR and SALMA who are forced to dig into their past and question their move.

Ritika is living in the USA with her husband, this particular night they are confronted with the most dreaded situation when they realize that Ritika is pregnant. She wants to have the baby but her husband considers himself financially incapable and still not ready to take the next step. What ensues is a series of heart wrenching discussions and delve into the past where they are forced to come face with the bitter truth of reasons for moving far away which is affecting their decisions now .

Kabir is all alone in this foreign country which he moved to via illegal means. He dearly misses his family whom he last met before stepping out of his Country. He hasn’t gone back ever since and now after so many years going back is not even an option as he is living unlawfully and the fear of getting caught and losing everything is greater. This is the first night in all the nights and probably the last when he opens the door to someone he can confide in – his concerned neighbor , who has come to check on him.

Salma moved to the USA to pursue her higher studies and get a job. But the idea of leaving her parents behind always haunted her. This particular night she has finally made her decision to leave everything that matters now and choose what matters the most. It hasn’t been an easy decision to make , either ways she is losing something close to her heart and she will be far away from, be it her love for Mike or her Parents. But she has to brave it all to go and start from where it all began.

This Particular night exposes the vulnerability of all the characters in a different light.

Saints of the Old City

Displaced visionaries struggle to re-invoke the spirit of Utopia in the ruins of a 21st century post-industrial American city.

A nameless man dressed in green awakens in a field, without clear memory of his arrival. Unconscious sense of direction leads him back to known territory--a minor American industrial city--where he gradually learns that his own history and the history of the city are entwined. His memory is the memory of the city itself. 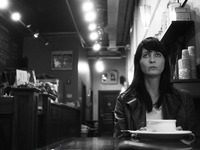 Hope is a successful photographer. Introverted and quiet, she appears in contrast with the glamorous environment she evolves in. When Hope learns that

Hope is a successful photographer. Introverted and quiet, her demeanor plays in stark contrast to her glamorous work environment. When she learns that her sister Ella has passed away, Hope is stunned... until she begins to receive text messages from her. Are they for real? Using art as a tool for recovery, Hope begins to accept the fatality of death. She will evoke her sister's presence - alive and in memoriam.

A man deals with his unfaithful wife.

Set in the 1940s, a man deals with the fact that his wife has been unfaithful. What should he do? Should he leave her? Should he punish her? Find out.

A woman, Marla, wakes up confused, not understanding why she's in bed with her ex or what happened the night before. Once it's relieved about how she ended up there, she begins questioning past decisions she's made.