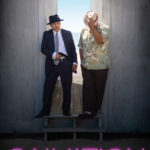 Salvation is a 1950s period piece about friendship, betrayal, and revenge. When two long-lost friends reunite under strange circumstances, they’re forced to face the consequences of their past, even if it means losing each other forever.

New England Connection: I live and work on Cape Cod.

Director(s) Bio:: Gabrielle Rosson lives, works, and makes art on Cape Cod. She graduated Phi Theta Kappa with a degree in Liberal Arts from Cape Cod Community College in 2016 and was the student commencement speaker for her graduating class. While at CCCC, Gabrielle wrote and performed a ten-minute play called Unhappy Endings that would become the origins of Get Up Eight, her first award-winning short film.