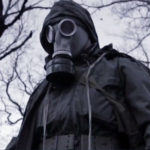 An individual known to the universe as ROT dissects and scavenges a dead world.

Director(s) Bio:: Nathan Amaral is a film student at Wheaton College Massachusetts where he is busy creating short films and working on the school's video production team. In Fall 2019, Nathan is attending the Film and TV School of the Academy of Performing Arts (FAMU) in Prague. Over the summer of 2019, Nathan worked as a production intern at Steer Films in Providence, RI.

His first two short feature films, ROT and Brutal!, have been selected for screening at multiple film festivals in the United States and abroad.