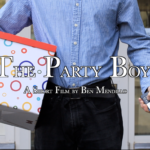 Stan and Wayne are just two guys on their way to a surprise party. They are professional partiers with years of experience under their belts, yet, they still find ways to make things go horribly wrong…

Director(s) Bio:: Ben Mendillo is a self-proclaimed film major studying at the University of Massachusetts Amherst.