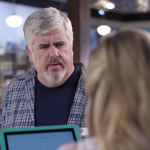 An unsuspecting customer falls into a web of words when a clerk decides to make her day more interesting.

New England Connection: The film was shot in RI and most talent was RI based.

Director(s) Bio:: Anthony Ambrosino is a producer and assistant director, known for Painless (2017), Indiana Jones and the Kingdom of the Crystal Skull (2008) and Almost Human (2013). He is a Rhode Island-based Producer, Director, and advocate for film and television production in the New England area. He has ten years of experience working on feature films, commercials, corporate and reality television. He has worked on numerous productions throughout the NE region and have produced six independent feature films which have garnered several awards, premiering at top film festivals such as the Toronto International Film Festival, Cinequest and Sitges. He is a founder and currently President of the Rhode Island Film Collaborative, a 2011 graduate of Leadership Rhode Island and a Producer and Programmer for the Pawtucket Film Festival.