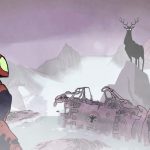 An orphaned astronaut goes on a journey to discover the true nature of the universe in this epic, evocative animated short.

New England Connection: Director Keith Boynton was born and raised in Connecticut, where he still lives and works.

Director(s) Bio:: Keith Boynton (Writer and Director) is a Connecticut-based playwright and filmmaker, and a recent graduate of Columbia University's MFA program, where he studied under Craig Lucas, Anne Bogart, and Charles L. Mee. His works for the stage include The Gumshoe at War (produced at the Signature Theatre, NYC), The Quotable Assassin and Walls (both produced at Altered Stages, NYC), and The Improbable Tragedy of Dr. Ivan Roshashonnavich, which was performed at a benefit by Sam Waterston, Laura Linney, Liam Neeson, and Meryl Streep. His last feature film, Chasing Home, screened at the Tucson Film and Music Festival, The New York City Independent Film Festival, and the Gotham Screen Film Festival (opening-night film). Some of his film work can be seen at crazylakepictures.com. The New York Times called him “a talent worth watching,” but they said some mean stuff too.