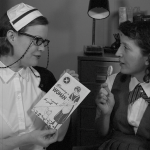 Young Sally anticipates the many changes associated with becoming a woman. Nurse Jenkins calmly provides information and advice about the biological and social aspects of menstruation. Parents and educators alike will appreciate this educational film for its frank and sympathetic portrayal of the proper attitudes about the transition into womanhood.

New England Connection: Marianne DiMascio grew up in Arlington, Massachusetts. She attended Arlington High School and University of Massachusetts Dartmouth. The cast and creative team all reside and work in Vermont. The film was shot in the Burlington, Vermont area.

Director(s) Bio:: Kevin Christopher has an M.A. in film from the University of Texas at Austin and has previously directed the short films The Goalie's Anxiety at the Urinal and Fancy Pants. He works extensively in local theatre and as Executive Director of Lake Champlain Access Television in Colchester.