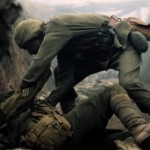 A wounded Australian sergeant comes across an armed Turkish soldier in a trench during World War One. 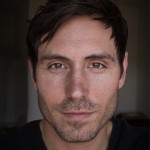