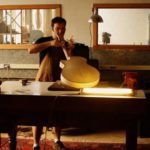 Guitar #1711 is a beautifully filmed experience of one guitars construction. From raw materials to finished performance this film explores the tools, relationships and skills that go into building fine guitars.

Director(s) Bio:: Guy Benoit, is graduate of Providence College and a Rhode Island based filmmaker. He is the screenwriter behind Richard Griffin's "Exhumed" and directed the shorts, The Chair and Crosley Fiver.