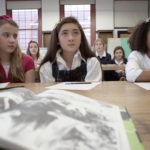 This is a short fictional narrative about a young girl who struggles to speak. As a selectively mute child, Sydney retreats to her vivid imagination during class and other situations where she may be expected to verbally communicate, as a way to escape her anxiety. Sydney begins to see a Speech Therapist, who decides to take an empathetic approach in therapy. As therapy progresses, Sydney discovers her love for ballet, and uses that as an outlet for communication.

New England Connection: All cast and crew reside in New England. The crew was mostly made up of the director's colleagues from Massachusetts College of Art and Design. She cast through NewEnglandFilm.com.

Director(s) Bio:: With a bachelor’s degree in Film/Video from the Massachusetts College of Art and Design, Talin has produced, shot and directed several of her own short films, and her largest project and most recent film, Demi Pointe, premiered in May 2012 and has been submitted to a number of film festivals, winning "Best Short" at the Boston International Film Festival. Her work often deals with themes of adolescence, cultural identity, social psychology, and movement.
Throughout her work, Talin has demonstrated a unique ability to enhance realism in all phases of video production -- from set design to direction to on-set interviewing -- and has shown a keen interest in art direction.
After living in Boston for four years during her college career, she is now a resident of Paxton, working at an advertising agency as a videographer/editor. When she’s not working on her latest video project, she enjoys visiting cafes with friends, working with youth and spending time with her family. Some of her other interests include Zumba, ballet, crocheting and knitting, ceramics, and doing photo shoots.