Back Around: An Animated Ode to Portland, Maine

Back Around is an animated music video created by Shamus Alley. A graduate of the Maine College of Art, Shamus has always been looking for a way to marry his two loves: music and art. Portland, Maine landmarks and characters serve as the backdrop of the video with an animated version of the artist meandering through the non-linear landscape. Shamus spent the better part of a year drawing, digitizing, syncing and editing his video using Flash, After Effects and ProTools. The finished product retains a home-made feel with Shamus’ distinctive drawing style.

New England Connection: Shamus Alley was born and raised in rural Maine. After graduating from the Maine College of Art, he spent six years in New York City, two years in Los Angeles and two more in Santa Fe. When he returned to Portland, Maine, he found himself walking the streets and marveling over what had changed... and more importantly, what had remained the same.

Director(s) Bio:: A Maine native, Shamus Alley graduated from the Maine College of Art with a degree in Graphic Design. He promptly left Portland's rocky coast in search of big city adventure. Six years spent working in New York City followed by four more in Los Angeles and Santa Fe left Shamus yearning for the cold New England Winter and the intimacy of a smaller city.
Shamus created his first film, The Speed of Life for the 2010 Santa Fe 3 Minute Film Festival. His latest movie is an animated video for a song that he wrote and recorded himself. The result is Back Around: An Animated Ode to Portland, Maine. 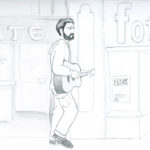