In Danger of Being Discovered 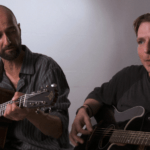 In Danger of Being Discovered takes a retrospective look at the rise of the music scene in the picturesque seacoast city of Portsmouth, NH during its Seattle-like musical peak in the mid 90’s. This was a time when local bands were king, live music venues flourished and it wasn’t a question of if you were going out to see a band, but rather which local band you were seeing and where. Portsmouth, NH was being hailed by the Boston media as the next Seattle musical sensation, where at least 5 of the 55+ local bands were being courted by major record labels, consistently selling out shows, out-requesting national acts on the radio and some even selling over 60,000 copies of their demo CD. This was a time when the music seemed like it was on the verge of exploding and catapulting the bands, and the scene that spawned them, to legendary success… but somehow the scene never managed to get the notoriety it deserved.

New England Connection: In Danger of Being Discovered is a film born, bread and based on the the mid 90's music scene in the seacoast of New Hampshire. It is a New England Film through and through. Everyone involved with the film is either from or currently located in New England. We are all excited to be part of the 2012 NewEnglandFilm.com Festival!

Director(s) Bio:: Marc Dole, President and Founder of Hatchling Studios -- Award winning filmmaker, Alumni of the NH state film commission, panelist, and guest lecturer to many Film Festivals, Digital Media conferences and adviser to local schools and colleges, Marc was named as one of the top “it” people by NH Magazine in 2007 & 2011 and received the NH Filmmaker of the Year Award in 2010. While Marc spends his day producing and directing national commercials and viral videos for top brands in the US, his indie films have been to over 100 film festival around the world, winning 20 first place prizes.
Michael Venn is a producer, writer, director, and musician. His film work began with the 48 hour film Tweet, he later made his writer/director debut in the award winning short film Dark Scribbles. His most recent work is collaborating as producer and co-director with Marc Dole in the feature documentary In Danger of Being Discovered. Michael has been the Music Supervisor and contributor on several films as well. As a musician he has played in the avant-garde jazz band “Prajna” (that found it’s home in the downtown jazz scene of NYC’s Knitting Factory), the folk/rock trio “The Dan Blakeslee 3,” the indie-rock bands “the Water Section” and “Lost Nation Road.”