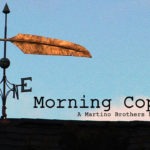 After a new neighbor moves in across the street, two retirees compete for the first, original print of the local newspaper and learn life is not a competition. 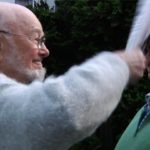