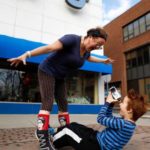 Vanessa Query is a a director, writer, performer, and organizer. She has written and directed several short films and has performed and produced sketch comedy, circus sideshow, and collaborative multimedia performance.

She has a B.A. in Theater from Antioch College, where she studied with Louise Smith. She has also studied circus sideshow and stunt work, improv comedy, guerrilla theater, melodrama, and commedia dell’arte with founding members of Faux-Real Theatre, Harley Newman, Todd Robbins of Coney Island, Ari Voukydis of the original Upright Citizens Brigade Theater, and the San Francisco Mime Troupe.

She has performed sketch comedy as part of The Pathological Upstagers and the Third Friday Players, and has performed circus sideshow as a solo performer.

She wrote and directed an autoperformance piece, “The Three P’s of the Human Experience,” and a one-act play, “It Adds Up.”

One of the first times she performed was on an episode of Comedy Central’s “Upright Citizens Brigade,” in which she played a girl in a coma.

She produced the Yellow Springs Short Film Festival and several open mic nights. She is currently the manager of The LAVA Center, a community arts space and venue in Greenfield, MA.

She was born and bred in Rhode Island, currently lives in Greenfield, Mass, and has second homes in Yellow Springs, Ohio and Clones, Co Monaghan, Ireland.