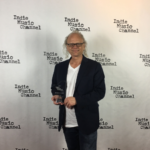 Michael Crowther is an award-winning composer / multi-instrumentalist specializing in a wide variety of instrumental styles renowned for its dramatic, emotional and cinematic flair. Among his many distinguished honors include 5 IMC Awards, 3 Radio Music Awards ASCAP awards and the Songwriter’s Network Award for “Best New Age Artist” which was based on a radio survey of over 3 million listeners worldwide!! With a credit list of over 60 film and television productions, this prolific  composer has covered practically every style, mood and genre imaginable including drama, mysteries, horror, animated films, children’s programs and comedies. Some of Michael’s clients include CBS for the promo for the hit TV series “Criminal Minds”, Cinemax for the new Mike Judge animated series “Tales From The Tour Bus”,  Nickelodeon for the series “Zoofari”, Animal Planet for the “Monsters Inside Me” series, Discovery Channel, PBS as well as music for video games for Big Fish Games, Shelley Games and many  others. He has composed original scores for many feature films for the big screen both foreign and domestic as well as commercials for Nissan, Toyota, Kia and Western Union to name a few. His theatrical credits include original scores for several plays and his music has been featured in over 20 video games and apps.  Michael’s albums have a unique blend of Contemporary Instrumental, New Age, Smooth Jazz, World music, lush orchestral compositions, cinematic soundscapes and gorgeous romantic themes using a combination of acoustic, ethnic and electronic instruments. His music continues to receive worldwide radio airplay and has reached the Number One position on various music charts. Many of Michael’s devoted fans describe his work as music filled with passion, mystery, emotion and imagery which take the listener on a visual ride through the mind’s eye. In addition to his full length albums, Michael’s music has been featured in over 60 compilation albums.

Coming from a musical family, Michael began playing music at the age of four after the untimely death of his father and retreated into a solitary world of musical exploration. With the gift of absolute pitch, Michael became proficient on many different instruments and began composing at an early age. His performing career began at age eleven on the club circuit and he received his first recording contract in his early twenties. Although he is a self-taught musician and composer, Michael’s educational backround includes studies at the prestigious Peobody Institute of Music. In his private state-of-the-art recording studio Michael takes special care in handling all aspects of his productions including doing all of the composing, arranging, engineering and playing all of the instruments himself. With an extensive catalog of a wide variety of styles, moods and lengths, Michael’s music is 100% cleared for licensing, and his flair for composing in a wide variety of genres has resulted in client satisfaction, a devoted international fan base and a reputation as an artist who can deliver. Aside from his work in the film, television and music industries, Michael has a passion for hiking and feels a close connection to the earth. He describes his outdoor experiences as “a means of cleansing the mind for creative and spiritual thought”. As an activist he has worked for many years for the preservation of our wilderness areas and wildlife habitats.

For a complete Filmography visit: https://www.crowthermusic.com/filmography