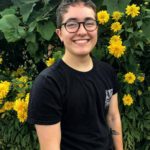 Alex Escaja is an award-winning filmmaker, community leader, and LGBTQ activist majoring in Film Studies and minoring in Sexuality and Gender Identity Studies at the University of Vermont. Growing up in a multi-lingual household, Alex was exposed to different cultures and viewpoints at an early age. Alex found films to be a perfect platform to express social issues in a way that establishes connections and fosters empathy between people of different backgrounds. His first film won a video contest hosted by NASA in 2013, and Alex has produced videos ever since, winning a variety of local and national film contests throughout the years – including a recent screening at the 2017 YoungFilmmakers Series in New York City. Outside of film, Alex works alongside an assortment of organizations, including Outright Vermont and Planned Parenthood, as an advocate and peer educator for LGBTQ youth. Alex is a Student Representative Board Member and Youth Leadership Council Member at Outright Vermont, where he tours as a panelist and advisor on the importance of inclusivity in classrooms. Alex is the Activism Committee Chair of UVM’s Queer Student Union, led as the president and founder of his high school’s Gender and Sexuality Alliance Club, and has interned at a variety of multimedia companies in addition to independent film production.

Years in Business: less than 1 year